Is the knife in the back sharp enough?

Do you ever wonder why people back stab and run you down? I am not innocent of this I have rundown ex boyfriends the odd boss and person but then they also know what I think. I tell outright or just plain let body language do its thing. I mean I am not rude, I can work with someone I don’t like I show common courtesy and politeness.

What I am talking about is that person maybe one of your friends maybe in your team, workplace or class who behind everyone’s back has something to say and will tell others what you said but put their slant on it. You could say something like I don’t like Billy Bears pants, next thing you know you get accused of running them down and putting shit on all that they wear. You might say some one is wearing something that you would never wear to work and low and behold you are calling that person a slut. These are things that I have seen at my work and have had happen to me. I must admit I have had far worse done to me in the past but this latest outbreak is just too much. 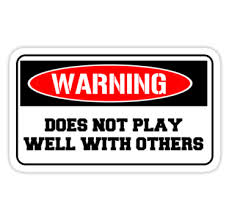 It has cost me two friends who have left work from this backstabbing in the work environment and the feeling of being unappreciated for the work you do. In my team which is very small, well I know that I will be the pariah, because when they start throwing shit I don’t I just can’t be bothered. life is too short to worry about someone else’s bullshit But this time I might just bite back at the bitch big time. I am sick and tired of it and I have only returned to work a couple of months ago. One person going around and around and being the relatively new person on the block who only works some hours of course I am an easy target.

I asked  friend who I have worked with for the past four years if I am hard to work with and she said no, she said to some I can take a bit of getting used too as I am “out there”  compared to others. I asked some other old timers, as that is what we seem to be and they said the same thing, I don’t think inside the box, I can be hard to understand but I get the job done and its usually a damn good job. We put the problems down to the new management and the uncertainty of the environment we work in.

You know I just can’t win, I am either in trouble for not being a team player, insulting people, being to abrupt and rude. to forceful. Yet other times I am wrong for doing too much not standing my ground blah blah.

I wish they would all leave me alone to do my job, because I am good at what I do.

An Aboriginal woman. mother of 4 diagnosed with an inoperable brain tumour 7 years ago.I want to share my story to help others. I am working to help other Aboriginal people face the battles of Cancer. Email me with your stories or concerns at aboriginalcancer.com END_OF_DOCUMENT_TOKEN_TO_BE_REPLACED
This entry was posted on Sunday, November 9th, 2014 at 1:37 pm and posted in Uncategorized. You can follow any responses to this entry through the RSS 2.0 feed.
« NACCHO Media Release: The Prime Minister who walked the talk for Aboriginal people
How to cope with a STD »